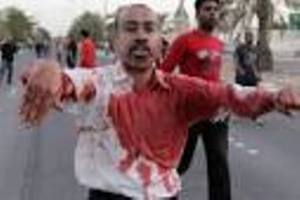 Bahrain is the antithesis of Saudi policy in Syria.  In the former, Saudi Arabia insists on being the killer of the Bahrain Revolution, whereas in Syria, Saudi Arabia is ridiculously projected a bona fide progressive supporter of freedom and democracy.  Never mind that this is hogwash when it comes to the repression and harsh rule of its own people, of which 4 million Saudis are living below the poverty line, while the members of the Saudi Royal family are among the highest net worth individuals in the world.  Saudi Arabia will simply not have any Arab Spring Revolts next door, as Yemen has proven as a case in point.  In Syria, the Saudis know well that its jihadist mercenaries that are generously paid for by the covert machines of the Wahhabi Establishment (an international contractor for “jihadist wars” for decades) in Dir’iya (South of , the stronghold of the Wahhabi clerical leadership, will never opt for democratic and free rule, so they carry out their own evil and bloody version of an “Arab Spring” Revolt there.  Apparently such awkward despotic doublethink seems to guaranty longevity for the Saudi archaic family royal enterprise, and preposterously Saudi Arabia is actually declared an ally against “terrorism”.  Never mind also, that terrorism is part and parcel of Saudi Wahhabi religious doctrine and a brutally applied methodology for maintaining the Saudi family tight noose against their people.  In the New World Order, business makes every oddity make sense!